By Stéphane Hamayon and Florence Legros

Less than three years after the official retirement age in France was raised in 2010-2011, a new pension reform was passed in early 2014.

This reform is described by its promoters as “sustainable and equitable”. However, only a few months after it passed, if we once again review the mid- and long-term balance of the pension system, we would have to conclude that this subject needs another look (see our article in the Revue de l’OFCE, no. 137, 2014). The suspected imbalance stems from a gap between the assumptions that prevailed in 2014 when the reform passed and the actual development of critical macroeconomic variables such as unemployment and productivity growth. END_OF_DOCUMENT_TOKEN_TO_BE_REPLACED 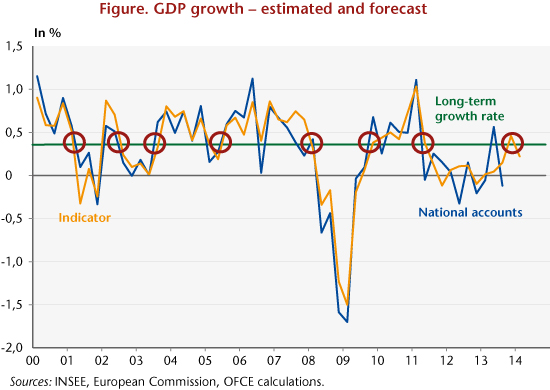 When he was elected François Hollande made fiscal discipline his main goal. The 2008 crisis was continuing to have an impact on the developed economies; in the face of a sovereign debt crisis, Europe’s governments had been implementing austerity measures that were to cause a second recession, a “double dip”, to use the language of economists. For example, when François Hollande came to power, the situation in France seemed disastrous: the public deficit was 5.2%, with a rise in the public debt of more than 600 billion euros since 2008 along with a 2-point rise in unemployment (to 9.6% of the workforce). The pressure was intense, and, the euro zone states were falling like dominos, with Spain and Italy in danger of following Greece, Portugal and Ireland. In this context, it seemed that only budgetary discipline could help Germany to support a faltering euro zone. END_OF_DOCUMENT_TOKEN_TO_BE_REPLACED

By Loïc Charles and Guillaume Daudin*

Recurrent questions on our economies are, to quote a few: Which factors and actors are key for economic development? What private and public behaviors are particularly growth-enhancing? How important are institutions and policies in shaping trade, in promoting innovations and then growth?…There are different ways of enhancing our knowledge to answer these questions. The first way consists in laboratory experiments where a small-scale environment is created in order to understand “how the different pieces of the system work and interact” This is particularly appropriate for learning on social preferences and dealing with welfare issues. But, as soon as questions related to growth – such those mentioned above – are concerned, laboratory experiments do not appear very suitable. One other way of enhancing our knowledge consists in analyzing what happens today in our country and, possibly, to carry out international comparisons in order to disentangle between what is “good” and what is “bad” for the economy. Once one is engaged in that direction, why stop at comparison across space? Analyzing what happened several decades or centuries ago and to learn from these past experiences for the current period can also be very fruitful. END_OF_DOCUMENT_TOKEN_TO_BE_REPLACED

Despite this, some people argue that the French tax-benefit (or socio-fiscal) system is not very redistributive. END_OF_DOCUMENT_TOKEN_TO_BE_REPLACED

The government has announced that the trend in unemployment will be reversed by the end of 2013. The number of jobseekers registered in category A with France’s Pôle Emploi job centre at the end of September increased by 60,000. The number fell during August by 50,000, mainly due to a “bug” in sending SMS texts, which led to an unusually large rise in the number of terminations due to the claimant’s failure to stay up to date (up 72,000 over the previous month). An increase in enrolments for the month of September due to the re-registration of jobless people who had been unduly terminated was therefore expected. The number of jobseekers registered in category A thus rose by 10,000 between July and September 2013, which meant that the trend is still upwards but at a more moderate pace than earlier in the year. These large variations in the very short term in the numbers registered with the ANPE job centre make it impossible to give a precise idea of upcoming trends in employment and unemployment. Our analysis of the labour market up to 2014, which is set out in the latest OFCE forecasts of October 2013, suggests that no significant improvement in unemployment is expected by the end of 2014. END_OF_DOCUMENT_TOKEN_TO_BE_REPLACED

This text summarizes the OFCE’s 2013-2014 forecast for the French economy.

In 2013, the French economy should experience annual average growth of 0.2%, which means that by the end of the year its level of production should return to the level of six years earlier, at the end of 2007. This mediocre performance is very far from the trajectory that an economy recovering from a crisis should be on.

The French economy did however have great potential for recovery: average spontaneous growth of about 2.6% per annum over the period 2010-2013 was possible and would have allowed France to make up the output gap accumulated in 2008-2009. But this “recovery” has been hampered mainly by the introduction of budget savings plans in France and across Europe. For the single year 2013, this fiscal strategy will cut economic activity in France by 2.4 GDP points. END_OF_DOCUMENT_TOKEN_TO_BE_REPLACED

Thanks to a high birth rate, France is aging less quickly than Germany. According to Eurostat, the French population is expected to exceed the German population by 2045. France could well become a European champion. But to what extent should we be talking about a demographic dividend? END_OF_DOCUMENT_TOKEN_TO_BE_REPLACED

* Note from the editor: This text was initially published on 10 June 2008 on the OFCE site under the heading “Clair & net” [Clear & net] at a time when working on Sundays was a burning issue. As this is once again a hot topic, we are republishing this text by Xavier Timbeau, which has not lost its relevance.

In Jules Dassin’s cult film, Ilya, a prostitute working a port near Athens, never works on Sunday. Today, according to the Enquête emploi labour force survey, nearly one-third of French workers say they occasionally work on Sunday and nearly one out of six does so regularly. As in most countries, Sunday work is regulated by a complex and restrictive set of legislation (see  here) and is limited to certain sectors (in France, the food trade, the hotel and catering industry, 24/7 non-stop manufacturing, health and safety, transport, certain tourist areas) or is subject to a municipal or prefectural authorization for a limited number of days per year. This legislation, which dates back more than a century, has already been widely adapted to the realities and needs of the times, but is regularly called into question. END_OF_DOCUMENT_TOKEN_TO_BE_REPLACED

“The ways of thinking society, managing it and quantifying it are indissolubly linked”

The subject of working poverty emerged in Europe in public debate and academic discussion in the early 2000s, in parallel with the implementation of policies to “make work pay”. European guidelines on employment have explicitly mentioned the need to reduce working poverty since 2003, and Eurostat set up an indicator on the working poor in 2005 (Bardone and Guio). In France, policies to make work pay have taken the particular form of earned income supplements (PPE, then RSA). In Germany, a series of reforms of the labour market and social welfare (the Hartz Laws) were introduced in the early 2000s with the aim of activating the unemployed. END_OF_DOCUMENT_TOKEN_TO_BE_REPLACED