The term “middle class” is one of those social science concepts that provoke controversy due to its complex definition and dynamics and the political debate it generates. The fact that it is surrounded by sharp controversy should not therefore come as a big surprise. In a note by the OFCE – where a multifaceted definition of the middle class is proposed [1] – we review several dimensions of the social malaise afflicting this social group, which is often considered to be relatively privileged, in an effort to understand the actual situation.

Two theses are considered here:
– on the one hand, the thesis of the middle class maintaining its former status, the strengthening of the protection its members enjoy and confirmation of their economic ascent [2] – a thesis that makes the “fear of decline” that haunts them a paradox;

– on the other hand, the thesis of an objective increase in social problems that were previously limited to people in lower strata (employees and workers, two social groups whose hourly wages are similar), with the upwards diffusion of the problems through capillary action now less blocked [3].

Proponents of the optimistic thesis, that of maintenance, argue that “contrary to popular belief”, the fall in status of the middle class is a “fiction”, as this social group “simultaneously embodies a ‘France holding its own’ and a ‘France that’s rising’” (Goux and Maurin). In this view, fear of decline is a psychological reaction of the middle class with no real cause.

In the Note, which upholds a different view, we review several aspects of this analysis to understand the objective basis for the malaise of the middle class. We show that the increasing difficulties faced by lower strata – for example, the risk of unemployment – are seeping into the intermediate middle classes, who can no longer be said to be protected. This is an element of the “theory of the lump of sugar at the bottom of the cup of coffee”: while the upper and middle parts of society still seem intact, erosion is continuing through the capillary-like action of the immersed part and, if nothing is done, it threatens inevitable deterioration. 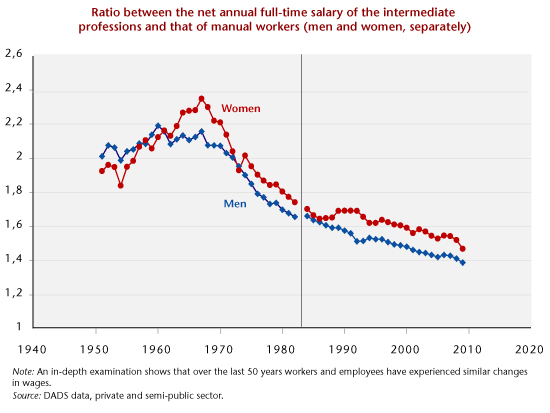 The relative standard of living of the intermediate middle class peaked in what the French call the “Trente glorieuses”, the three decades of post-war prosperity: since the end of this golden age, stagnant wages and incomes, the reduction of wage differentials with the lower classes holding jobs (see chart), the unprecedented risk of unemployment, the numerical expansion of diplomas to numbers that go well beyond the space available in the intermediary professions, and the consequent devaluation of education, etc., were a number of the problematic issues analyzed in this paper that highlight the existence of a very real malaise. It is thus possible to show that, in terms of diplomas, the intermediate middle class population increasingly consists of a share of potential managers (based on their level of education) who have not actually managed to enter the upper middle class, due to a lack of sufficient places, and on the other hand survivors of the intensified competition, a reflection of the growing number of people with the same level of education who have fallen into the lower classes.