The financial markets: Sword of Damocles of the presidential election

Although some of the candidates may deny it, the financial risk linked to the fiscal crisis in the euro zone is the guest of honour at the presidential campaign. As proof that this is a sensitive issue, the launch in mid-April of a new financial product on French debt crystallized concerns. It must be said that this took place in a very particular context: the Greek default showed that the bankruptcy of a euro zone country had become possible. Despite the budgetary firewalls in place since May 2010 (including the European Financial Stability Fund), some of France’s neighbours are facing a lack of confidence from the financial markets, which is undermining their ability to meet their commitments and ensure the fiscal sustainability of their government debt, the most worrying example to date being Spain. What tools are available to speculators to attack a country like France, and what should be feared in the aftermath of the presidential election?

The tool used most frequently for speculation on a country’s public debt is the Credit Default Swap, or CDS. This contract provides insurance against a credit event, and in particular against a State’s default (see the “Technical functioning of CDS” annex for more detail). Only institutional investors, mainly banks, insurance companies and hedge funds, have direct access to the CDS market on sovereign States [1].

Credit default swaps are used not only for coverage, but also as an excellent means of speculation. One criticism made of the CDS is that the buyer of the protection has no obligation to hold any credit exposure to the reference entity, i.e. one can buy CDS without holding the underlying asset (“naked” purchase/sale). In June 2011, the CDS market represented an outstanding notional amount of 32,400 billion dollars. Given the magnitude of this figure, the European Union finally adopted a Regulation establishing a framework for short-selling: it prohibits in particular the naked CDS on the sovereign debt of European States, but this will take effect only on 1 November 2012.

The FOAT: new instrument for speculation on French debt?

This new financial instrument, introduced by Eurex on April 16 [2], is a futures contract, that is to say an agreement between two parties to buy or sell a specific asset at a future date at a price fixed in advance. The specific asset in this case is the French Treasury OAT bond, with a long residual maturity (between 8.5 and 10.5 years) and a coupon of 6%, ​​and it has a face value of 100,000 euros. Should we worry about the launch of this new contract on the eve of the presidential election? Not when you consider that the launch of the FOAT addresses the gap in yields between German and French bonds that has arisen since the recent deterioration of France’s sovereign rating: previously, as German and French bond yields were closely correlated, the FOAT on German bonds allowed coverage of both German and French bond risks. After the gap in yields between the two countries widened, Eurex decided to create a specific futures contract for French bonds. Italy witnessed this same phenomenon: in September 2009, Eurex also launched three futures contracts on Italian government bonds [3]. In addition, Eurex is a private market under German law, and is much more transparent than the OTC market on which CDS are traded. Note that the FOAT launch was not very successful: on the day it was launched, only 2,581 futures contracts were traded on French bonds, against 1,242,000 on German bonds and 13,671 on Italian bonds [4].

Even if, as with the CDS, the primary function of the FOAT is to hedge against risk, it can also become an instrument for speculation, including via short selling. While speculation on French debt was previously limited to large investors, with an average notional amount of 15 billion euros per CDS [5], the notional amount of the new FOAT contract is 100,000 euros, which will attract more investors into the market for French debt. If speculators bet on a decline in the sustainability of France’s public finances, then the price of futures contracts on the OAT bonds will fall, which will amplify market movements and result in higher interest rates on OAT contracts.

The not so rosy future?

It is difficult to predict how the financial markets will behave in the wake of the French presidential election. Studying what has happened in other euro zone countries is not very informative, due to each one’s specific situation. The country most “comparable” to France would undoubtedly be Italy. However, the appointment of Mario Monti in November 2011 took place in an unusual context, where the formation of a technocratic government was specifically intended to restore market confidence through a strenuous effort to reduce the deficit, with Italy also benefitting from the ECB’s accommodative policy.

The French budgetary configuration is different, as the financial imperative appears only in the background. The candidates of the two major parties both advocate the need to restore a balanced budget. Their timetables are different (2016 for Nicolas Sarkozy’s UMP, 2017 for François Hollande’s PS), as are the means for achieving this: for Sarkozy, the focus will be more on restraint in public spending (0.4% growth per year between 2013 and 2016, against 1.1% for the PS), while Hollande emphasizes growth in revenue, with an increase in the tax burden of 1.8% between 2012 and 2017 (against 1% for the UMP).

But this is not the heart of the matter. What is striking, beyond the need to reduce public deficits in the euro zone countries, is the fact that our destinies are inextricably linked. As is shown by the graph on changes in bond yields in the euro zone (Figure 2), when the euro zone is weakened, all the countries suffer an impact on their risk premium relative to the United States and the United Kingdom, although to varying degrees. It is therefore unrealistic to think about France’s budget strategy and growth strategy outside of a European framework. What will prevent the financial markets from speculating on a country’s debt is building a Europe that is fiscally strong, has strict rules, and is supported by active monetary policy. This construction is taking place, but it is far from complete: the EFSF does not have sufficient firepower to help countries in difficulty; the growth strategy at the European level agreed at the summit of 2 March 2012 needs to be more comprehensive; and the ECB needs to pursue an active policy, like the Fed, which specifically requires a revision of its statutes. As was pointed out by Standard and Poor’s when it announced the downgrade of the French sovereign rating last December, what will be watched closely by the financial markets is the fiscal consistency of the euro zone. On 6 May 2012, what attitude will the next President then take vis-à-vis the construction of the budget and how able will he be to assert his position in the euro zone – this will determine the future attitude of the financial markets, not only vis-à-vis France, but also vis-à-vis every euro zone country. 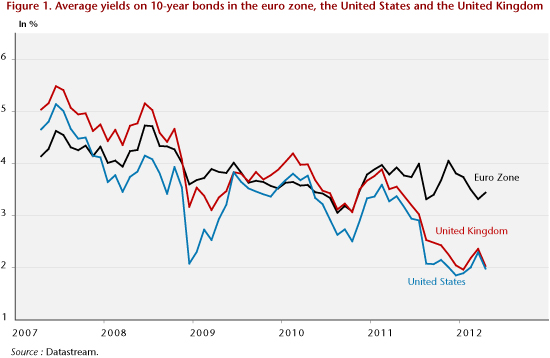 The contract buyer acquires the right to sell a benchmark bond at its face value (called the “principal”) in case of a credit event. The buyer of the CDS pays the seller the agreed amounts at regular intervals, until maturity of the CDS or the occurrence of the credit event. The swap is then unwound, either by delivery of the underlying instrument, or in cash. If the contract terms provide for physical settlement, the buyer of the CDS delivers the bonds to the seller in exchange for their nominal value. If the CDS is settled in cash, the CDS seller pays the buyer the difference between the nominal amount of the buyer’s bonds and the listed value of the bonds after the credit event (recovery value), in the knowledge that in this case the buyer of the CDS retains its defaulted bonds. In most cases, the recovery value is determined by a formal auction process organized by the ISDA (International Swaps and Derivatives Association). The annual premium that the bank will pay to the insurance company for the right to coverage is called the CDS spread and constitutes the value listed on the market: the higher the risk of default, the more the CDS spread increases (Figure 1). In reality, as the banks are both the buyers and sellers of protection, the spread is usually presented as a range: a bank can offer a range from 90 to 100 basis points on the risk of a French default. It is thus ready to buy protection against the risk of default by paying 90 basis points on the principal but it demands 100 to provide that protection.

To illustrate this, consider the following example. On 7 May 2012, a bank (buyer) signs a CDS on a principal of 10 million euros for five years with an insurance company (seller). The bank agrees to pay 90 basis points (spread) to protect against a default by the French State. If France does not default, the bank will receive nothing at maturity, but will pay 90,000 euros annually every 7 May for the years 2012-2017. Suppose that the credit event occurs on 1 October 2015. If the contract specifies delivery of the underlying asset, the buyer has the right to deliver its French bonds with a par value of 10 million euros and in exchange will receive 10 million euros in cash. If a cash settlement is expected, and if the French bonds are now listed only at 40 euros, then the insurance company will pay the bank 10 million minus 4 million = 6 million euros. 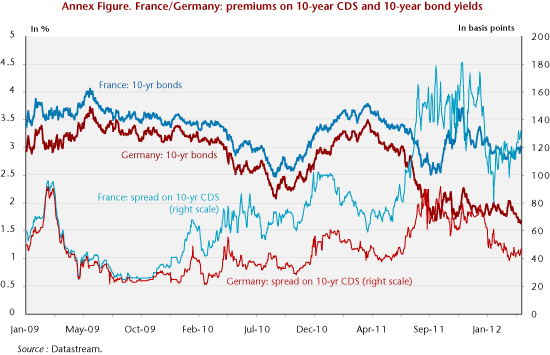 [1] Individuals can play on the markets for corporate CDS via trackers (collective investment in transferable securities that replicates the performance of a market index).

[2] The Eurex was created in 1997 by the merger of the German futures market, Deutsche Termin-Borse (DTB), and the futures market in Zurich, the Swiss Options and Financial Futures Exchange (SOFFEX), to compete with the LIFFE. It belongs to Deutsche Börse and dominates the market for long-term financial futures.

[4] Note that this comparison is biased due to the fact that there are 4 types of futures contracts on German debt, 3 on Italian debt and only 1 on French debt.

[5] Weekly data provided by the DTCC for the week of 9 to 13 April 2012 on CDS on French sovereign debt: the outstanding notional amount came to 1,435 billion dollars, with 6822 contracts traded.