An interesting question raised in many forums is why Greek depositors continue to have confidence in their government while Greek bonds holders do not.

The Hellenic Deposit and Investment Guarantee Fund’s (HDIFGF) derives resources from initial membership as well as from annual contributions paid by credit institutions. If these resources are not sufficient to compensate depositors in case of failures, supplementary resources are provided by the Central Bank (Law 3746/2009).

But in the case of a bank run, would the Greek government be able to pay those depositors without the help of the European Central Bank? The Greek debt is now 153% of the GDP, up from 106% in 2007. Is it reasonable to believe that the government can raise extra funds in case of a bank run without the need to print money and with no explicit guarantee? (In practice, the European Central Bank is not obliged to bailout Greek banks or to insure Greek depositors).

In the aftermath of Irish increase of the deposit guarantee in 2008, many countries followed suit in order to prevent depositors from looking for safer accounts in other European countries. Greece was one of them. It increased the insurance to cover deposits up to 100,000€. That might be one of the reasons why Greek bank deposits increased considerably during 2008 and 2009 (14.4 and 11% respectively). Although it seems to be that depositors are turning their back to the banks (deposits have been falling since then, -6.7% in 2010 and -10.14% during the first 7 months of 2011), once considering the effect of the fall of income, the deposit/consumption ratio is still over the average for the decade (the ratio between deposits and consumer expenditures is decreasing but it is still higher than what it was during the period 2001-2008, figure 2). Surprisingly, depositors’ behaviour has not been really affected by the country risk (see figure 1, the spread of Greek bonds over the German ones is a measure of government risk and it has risen). 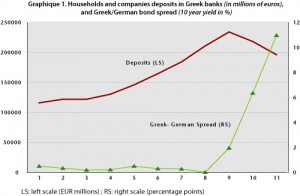 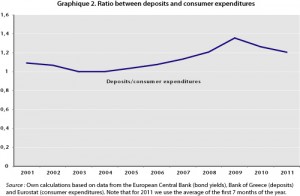 What makes Greek depositors apparently so confident in their banks? It must be recalled that beyond deposit insurance, it might take time if depositors were to get their money back in case of failures, (up to 6 months according to the HDIFGF – ask Northern Rock depositors for more information about the subject!). What would happen if eventually Greece decided to abandon the Euro? In which currency would depositors expect to be paid? In this case better ask the question to Argentinean depositors!

I do not want to spread fear among Greek depositors but to debate the implications of greater financial integration without an explicit European safety net. For example, should deposit insurance be a national matter or a European one? What about supervision? Today the centre of the hurricane is in Greece, but the risk of contagion to other countries is high.