Since the onset of the financial crisis, long-term sovereign interest rates in the euro zone have undergone major fluctuations and periods of great divergence between the member states, in particular between 2010 and 2013 (Figure 1). Long-term rates began to fall sharply after July 2012 and Mario Draghi’s famous “whatever it takes”. Despite the implementation and expansion of the Public Sector Purchase Programme (PSPP) in 2015, and although long-term sovereign interest rates remain at historically low levels, they have recently risen. 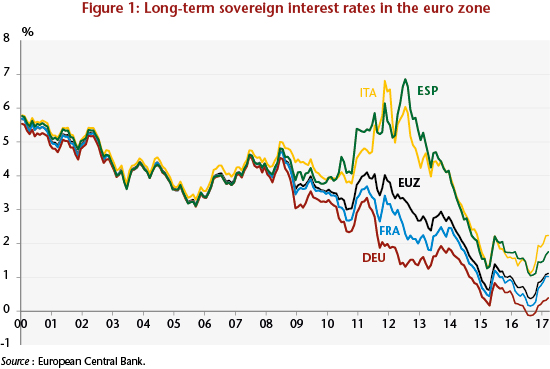 There may be several ways of interpreting this recent rise in long-term sovereign interest rates in the euro zone. Given the current economic and financial situation, it may be that this rise in long-term rates reflects the growth and expectations of rising future growth in the euro zone. Another factor could be that the euro zone bond markets are following the US markets: European rates could be rising as a result of rising US rates despite the divergences between the policy directions of the ECB and of the Fed. The impact of the Fed’s monetary policy on interest rates in the euro zone would thus be stronger than the impact of the ECB’s policy. It might also be possible that the recent rise is not in line with the zone’s fundamentals, which would then jeopardize the recovery from the crisis by making debt reduction more difficult, as public and private debt remains high.

Between August 2016 and February 2017, long-term interest rates rose by 0.7 percentage point. While the ECB’s asset purchase programme helped to reduce the interest rate, two factors combined to push it up. The first is the increase in long-term interest rates in the United States following the Fed’s tightening of monetary policy. The second factor concerned political tensions in France, Italy and Spain, which led to a perception of political risk and higher sovereign risk. While the first factor may continue to push up interest rates in the euro zone, the second should drive them down given the results of the French presidential elections. 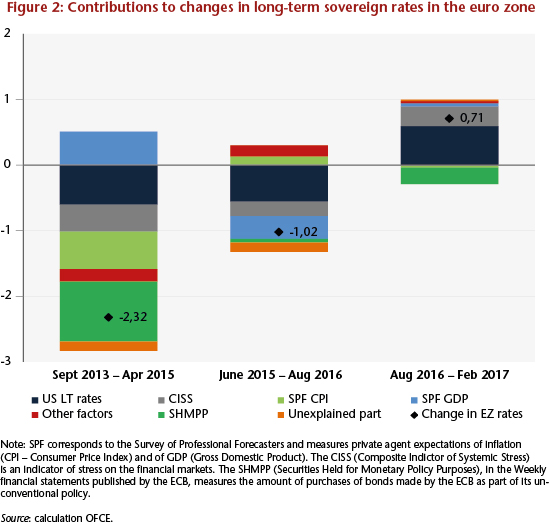