Given the statements by the Minister of Economy and Finance, the government seems to have reached a decision to abandon the goal of a deficit of 3% of GDP by 2013. In addition to the change of tack in the policy announced up to now, which was to bring the deficit down to 3% by 2013 “whatever the cost”, we can legitimately conclude that France is right to abandon this goal, and we offer several arguments for this. While in this post we do not review the economic consequences of the fiscal policy being undertaken in France and the euro zone, which has been dictated by nominal targets for the deficit that do not take into account the way it breaks down structurally / cyclically and that have a dangerously pro-cyclical character, we nevertheless present several arguments that the European Commission may find of value:

1 – According to the latest figures from the European Commission on 22 February 2013[1], of the euro zone countries making the greatest fiscal adjustment in 2013 from a structural viewpoint, France, with 1.4 GDP points, comes behind only Spain (3.4) and Greece (2.6). For the 2010-2013 period, the reduction in France’s structural deficit represents 4.2 GDP points, which makes France the euro zone country which, alongside Spain (4.6 GDP points), has carried out the largest budget cutbacks of the major countries in the zone, ahead of Italy (3.3 GDP points), the Netherlands (2.6) and of course Germany (1.2) (Figure 1). 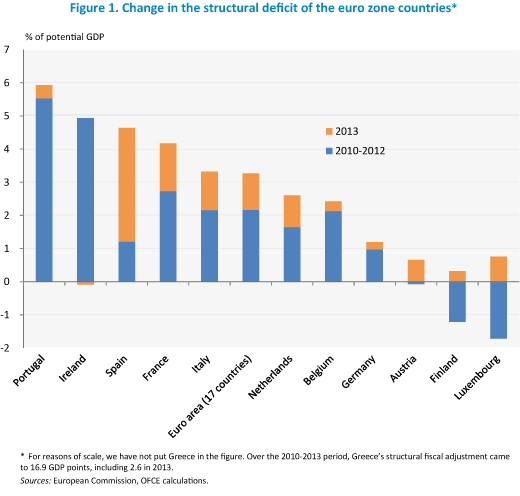 3 – In 2013, the public deficit, even at 3.7% of GDP according to the European Commission, is once again at a level close to that of 2008, similar to that of 2005, and below that of 2004 and of the entire 1992-1996 period. The public deficit figure expected for 2013 corresponds to the average over the past thirty years, and thus no longer seems so exceptional, which is easing the pressure that France could experience on the financial markets. In contrast, according to the European Commission the unemployment rate in France in 2013 will reach 10.7% of the workforce, which is very close to its historic peak in 1997 (Figure 2). With an unemployment rate in 2013 that is 1.3 percentage points higher than the average over the last thirty years, an exceptional situation now characterizes the labour market more than it does the government deficit. While new austerity measures would help to reduce the deficit, however painfully, due to the high value of the fiscal multiplier in the short term they will lead on the other hand to going well beyond our historic unemployment peak. Indeed, as we showed in our latest forecast in October 2012, if France really tries to meet its budget commitment for 2013 “whatever the cost”, this will require a new fiscal tightening of over 20 billion euros, in addition to the 36 billion euros already planned. This would lead to a recession, with GDP down -1.2% and 360,000 job losses (instead of expected growth of 0% and the loss of about 160,000 jobs), with the unemployment rate reaching 11.7% of the labour force by late 2013. 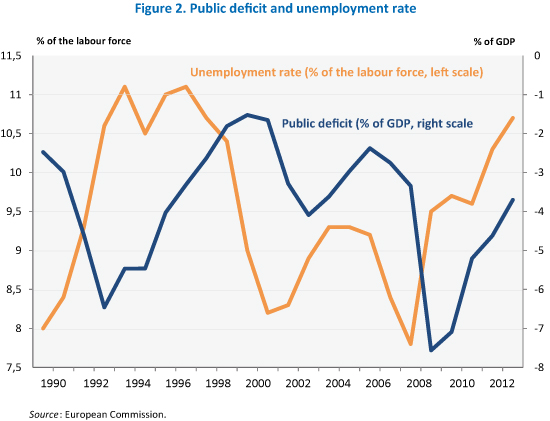 To restore its public accounts since 2010, France has undertaken a historic fiscal effort, well beyond the average of its European partners, which has cost it in terms of growth and employment. Adding another layer of austerity in 2013 to the already historic build-up of austerity would lead us this year straight into a recession and an unprecedented worsening in the labour market. If there is a choice, are a few tenths of a point in the public deficit worth such a sacrifice? Nothing is less certain. It is thus essential to put off the goal of reducing the deficit to 3% of GDP to at least 2014.

[1] We have a different evaluation of the level of the structural deficit. For example, for 2013 we evaluate the improvement in France’s structural public deficit at 1.8 GDP points, but in order not to prejudice the analysis we are using the figures provided by the Commission.