Why has French growth been revised downwards? 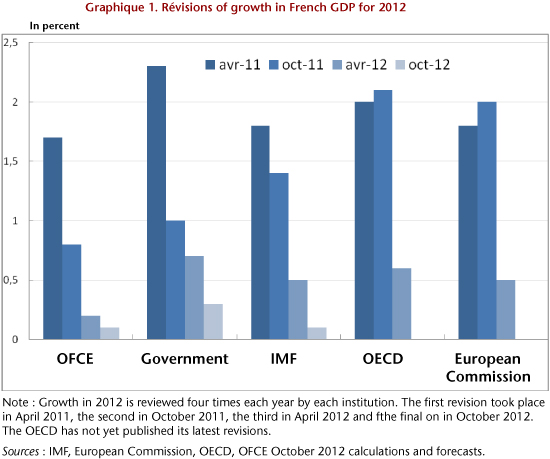 Figure 1 shows that between the forecast made in April 2011 and the latest available forecast, the government, like all the other institutions, revised its growth forecast for France sharply downwards.

The austerity policies have also been strengthened at the same time, particularly in the euro zone. The European countries undertook their stability program in order to return to balanced public finances within three years. In contrast to the years before the crisis, the implementation of these commitments is now considered a necessary or even sufficient condition for pulling out of the crisis. Moreover, in a context of financial uncertainty, being the only State not to meet its commitment to fiscal consolidation would be punished immediately by the markets (higher sovereign rates, a downgraded rating, a fine from the European Commission, implicit contagion of sovereign defaults). But in trying to reduce their deficits abruptly and synchronously, Europe’s governments are inducing new slowdowns in activity.

A vicious circle has been created: with each downward revision in their forecasts for 2012 growth, Europe’s governments implement new austerity measures to meet their deficit commitments. This has happened in France, but especially in Italy, which has virtually tripled its fiscal effort, and in Spain, which is now engaged in the greatest austerity effort of any major European country.

According to our estimates for the French economy (that is to say, using a multiplier of 1), the series of fiscal savings plans adopted at the national level have led to revising growth downwards by -1.1 points between April 2011 and October 2012 (from an impact of -0.5 GDP point to -1.6 points). Since these same policies are in force in our trading partners, this has led to revising growth for this same period by 0.9 point due to foreign trade (from -0.5 GDP point to ‑1.4 point) (Figure 2). 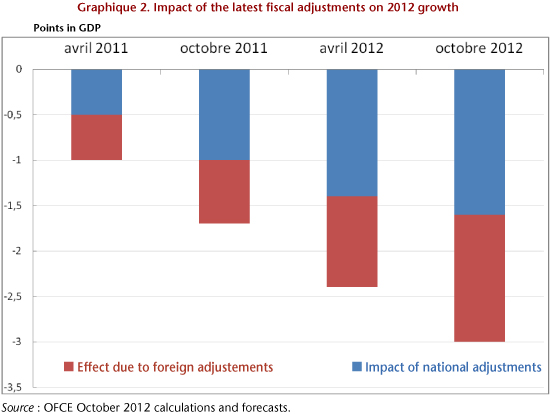 For the year 2012, the OFCE’s revisions for the French economy can be explained in full simply by the escalation in the fiscal savings measures announced over the last 12 months, i.e. the national plans and those applied by our partner countries (Table 1).

Leaving aside this escalation of austerity, our diagnosis of the French economy has changed very little over the last 18 months: without it, we would have even revised our growth forecast slightly upwards (0.4%).