This text summarizes the special study of the October 2012 forecast.

Since the summer of 2007, the central banks of the industrialized countries have intervened regularly to counter the negative impact of the financial crisis on the functioning of the banking and financial system and to help kick-start growth. Initially, key interest rates were lowered considerably, and then maintained at a level close to 0 [1]. In a second phase, from the beginning of 2009, the central banks implemented what are called unconventional measures. While these policies may differ from one central bank to another, they all result in an increase in the size of their balance sheets as well as a change in the composition of their balance sheet assets. However, three years after the economies in the United States, the euro zone and the United Kingdom hit bottom, it is clear that recovery is still a ways off, with unemployment at a high level everywhere. In Europe, a new recession is threatening [2]. Does this call into question the effectiveness of monetary policy and of unconventional measures more specifically?

For almost four years, a wealth of research has been conducted on the impact of unconventional monetary policies [3]. Cecioni, Ferrero and Sacchi (2011) [4] have presented a review of recent literature on the subject. The majority of these studies focus on the impact of the various measures taken by the central banks on financial variables, in particular on money market rates and bond yields. Given the role of the money market in the transmission of monetary policy, the ability of central banks to ease the pressures that have emerged since the beginning of the financial crisis constitutes a key vector for effective intervention. More recently, this was also one of the reasons motivating the ECB to conduct an exceptional refinancing operation in two stages, with a maturity of 3 years. This intervention has indeed helped to reduce the tensions on the interbank market that had reappeared in late 2011 in the euro zone, and to a lesser extent in the United States and the United Kingdom (see graph). This episode seems to confirm that central bank action can be effective when it is dealing with a liquidity crisis.

Another critical area of debate concerns the ability of unconventional measures to lower interest rates in the long term and thereby to stimulate activity. This is in fact an important lever for the transmission of monetary policy. The findings on this issue are more mixed. Nevertheless, for the United States, a study by Meaning and Zhu (2012) [5] suggests that Federal Reserve programs to purchase securities have contributed to lowering the rates on 10-year US Treasury bills: by 60 points for the first “Large-scale asset purchase” program (LSAP1) and by 156 points for LSAP2. As for the euro zone, Peersman [6] (2011) shows that the impact of unconventional measures on activity has in general closely resembled the effect of lowering the key interest rate, and Gianone, Lenza, Pill and Reichlin [7] (2012 ) suggest that the various measures taken by the ECB since the beginning of the crisis have helped offset the rise in the unemployment rate, although the impact is limited to 0.6 point.

Under these conditions, how is it possible to explain the weakness or outright absence of a recovery? One answer evokes the hypothesis of a liquidity trap [8]. Uncertainty is still prevalent, and the financial system is still so fragile that agents are continuing to express a preference for liquidity and safety, which explains their reluctance to undertake risky projects. Thus, even if financing conditions are favourable, monetary policy will not be sufficient to stimulate a business recovery. This hypothesis probably explains the timidity of the recovery in the United States. But in the euro zone and the United Kingdom this hypothesis needs to be supplemented with a second explanation that recognizes the impact of restrictive fiscal policies in holding back recovery. The euro zone countries, like the UK, are pursuing a strategy of fiscal consolidation that is undermining demand. While monetary policy is indeed expansionary, it is not able to offset the downward pressure of fiscal policy on growth. 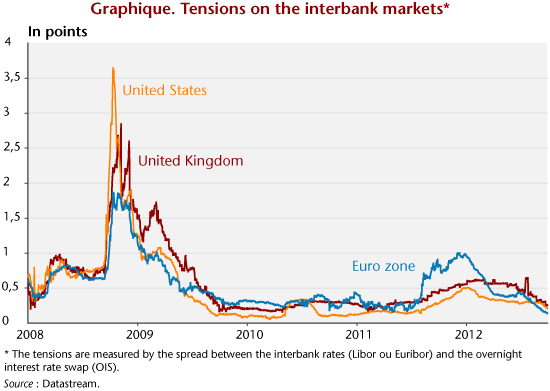 [1] One should not, however, forget the exception of the ECB, which prematurely raised its key interest rate twice in 2011. Since then it has reversed these decisions and lowered the key rate, which has stood at 0.75% since July 2012.

[2] The first estimate of UK GDP for the third quarter of 2012 indicates an upturn in growth following three quarters of decline. However, this rebound is due to unusual circumstances (see Royaume-Uni: l’enlisement), and activity will decline again in the fourth quarter.

[3] Unconventional monetary policies have already been analyzed repeatedly in the case of the Bank of Japan. The implementation of equivalent measures in the United States, the United Kingdom and the euro zone has contributed to greatly amplifying the interest in these issues.

[4] “Unconventional monetary policy in theory and in practice”, Banca d’Italia Occasional Papers, no.102.