By the Analysis and Forecasting Department, under the direction of Eric Heyer and Xavier Timbeau

While up to now the euro zone had not been part of the global recovery, the conjunction of a number of favourable factors (the fall in oil prices and depreciation of the euro) will unleash a more sustained process of growth that is shared by all the EU countries. These developments are occurring at a time when the massive and synchronised fiscal austerity that had pushed the euro zone back into recession in 2011 is easing. The brakes on growth are gradually being lifted, with the result that in 2015 and 2016 GDP should rise by 1.6% and 2%, respectively, which will reduce unemployment by half a point per year. This time the euro zone will be on the road to recovery. However, with an unemployment rate of 10.5% at the end of 2016, the social situation will remain precarious and the threat of deflation is not going away.

After a period during the Great Recession of 2008-2009 when growth was boosted by expansionary fiscal policy, the euro zone countries quickly reversed their policy orientation and adopted a more restrictive one. While the United States also chose to reduce its budget deficit, austerity has had less effect there. First, the negative demand shock at the euro zone level was amplified by the synchronisation of the consolidation. Second, in a context of rising public debt, the lack of fiscal solidarity between the countries opened up a breach for speculative attacks, which pushed up first sovereign rates and then bank rates or the non-financial agents market. The euro zone plunged into a new recession in 2011, while globally the momentum for growth gathered pace in the other developed countries (chart). This episode of consolidation and financial pressure gradually came to an end. In July 2012, the ECB made a commitment to support the euro; fiscal austerity was eased in 2014; and the Member States agreed on a draft banking union, which was officially initiated in November 2014, with new powers on banking supervision entrusted to the ECB. All that was lacking in the euro zone then was a spark to ignite the engine of growth. The transfer of purchasing power to households that resulted from the fall in oil prices – about one percentage point of GDP if oil prices stay down until October 2015 – represents this positive demand shock, which in addition has no budget implications. The only cost resulting from the shock comes from the decline in income in the oil-producing countries, which will lead them to import less in the coming quarters.

An external demand shock will combine with this internal demand shock in the euro zone. The announcement of a quantitative easing programme in the euro zone represents a second factor accelerating growth. This programme, under which the ECB is to purchase more than 1,000 billion euros of securities at a pace of 60 billion per month until September 2016, not only will amplify the fall in sovereign yields but more importantly will also lead to a reallocation of portfolio assets and drive the euro (further) down. Investors looking for higher returns will turn to dollar-denominated securities, especially as the prospect of a gradual monetary tightening in the US improves the outlook for earnings on this side of the pond. The rising dollar will lift the currencies of the Asian countries with it, which will increase the competitive advantage of the euro zone at the expense this time of the United States and some emerging countries. It is unlikely that the fragility induced in these countries and in the oil-producing countries by the oil shock and by the decline in the euro will offset the positive effects expected in the euro zone. On the contrary, they will also be vectors for the rebalancing of growth needed by the euro zone.

Investment is the factor that will complete this growth scenario. The anticipation of higher demand will remove any remaining reluctance to launch investment projects in a situation where financing conditions are, overall, very positive, representing a real improvement in countries where credit constraints had weighed heavily on growth.

All this will lead to a virtuous circle of growth. All the signals should turn green: an improvement in household purchasing power due to the oil impact, increased competitiveness due to the lower euro, an acceleration in investment and, ultimately, growth and employment.

While the elements promoting the euro zone’s growth are not mere hypotheticals about the future but represent a number of tangible factors whose effects will gradually make themselves felt, the fact remains that they are somewhat fragile. The falling price of oil, for instance, is probably not sustainable. The equilibrium price of oil is closer to USD 100 than USD 50 and, ultimately, a rise in energy prices is in the cards: what has a positive effect today could undermine the resumption of a recovery tomorrow. The decline of the euro seems more long-term; it should last at least until the end of the ECB’s quantitative easing programme, which officially is at least September 2016. The euro should not, however, fall below a level of 0.95 dollar per euro. The time it takes for changes in exchange rates to translate into trade volumes, however, should allow the euro zone to benefit in 2016 from a gain in competitiveness.

It is worth noting that a Greek exit from the euro zone could also put a halt to the nascent recovery. The firewalls set up at the European level to reduce that risk should limit any contagion, at least so long as the political risk has not been concretised. It will be difficult for the ECB to support a country where a party explicitly calling for leaving the euro zone is at the gates of power. The contagion that is now considered extinguished could then catch fire again and reignite the sovereign debt crisis in the euro zone.

Finally, the constraints of the Stability Pact have been shifted so as to leave more time to the Member States, particularly France, to get back to the 3% target. They have therefore not really been lifted and should soon be reinforced once it comes to assessing the budgetary efforts being made by the countries to reduce their debt. 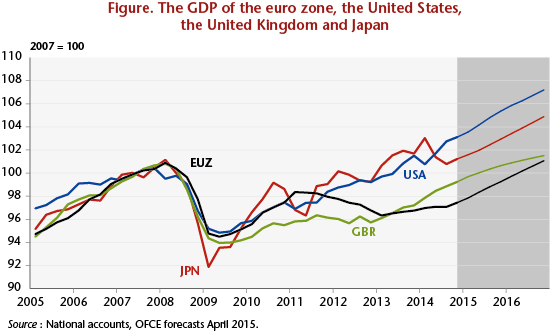