by Loïc Charles, University of Paris-8, and INED,

In a special issue of the Revue de l’OFCE, Loïc Charles and Guillaume Daudin have gathered an international team of talented scholars, economists and historians, to provide an up-to-date and in-depth synthesis on the quantitative sources of data on early-modern trade. The issue focuses on the long eighteenth century (1713-1815) with occasional forays on earlier and later periods, namely the XVIIth and XIXth centuries. Besides the fact that it is during the eighteenth-century that most Europeans as well as some extra Europeans nations began to measure their external trade on a regular and organized basis, it is also of special interest as it includes the founding event of the economic history of modern societies, the Industrial Revolution. It is sometime between 1750 and 1815 that Great Britain opened the era of the great divergence, escaping once and for all from the Ancien Regime economic constraints. Soon other European countries and regions would take the same path. Trade statistics provide a unique opportunity to learn more about the early phase of the European industrial revolution and how it impacted on their economies. They might help explore the economic geography of early modern nations. They are of interest for all economists interested in economic development and globalization. Still, difficulties in locating them precisely as well as methodological issues have prevented for a long time researchers, especially economists, from using them. It is the aim of the authors of this special issue dedicated to eighteenth-century trade statistics to change this course.

The issue is made of two parts. The first one includes seven essays that reflect on the use of large sets of international trade data. Three of the papers discuss methodological issues and four papers illustrate how trade statistics can be used to produce new insights in the economic history. In the second part, one finds twenty-three short essays that described in details the sources of trade data, centered around the eighteenth century. All in all, these shorts essays provide thorough information on thirty-five countries or areas, the large majority of them European. We have summarized the geographical coverage of the volume as well as the type of information provided in the sources in the two maps below.

The table of contents as well as the articles of the special issue may be accessed here: http://www.ofce.sciences-po.fr/publications/revue140.php 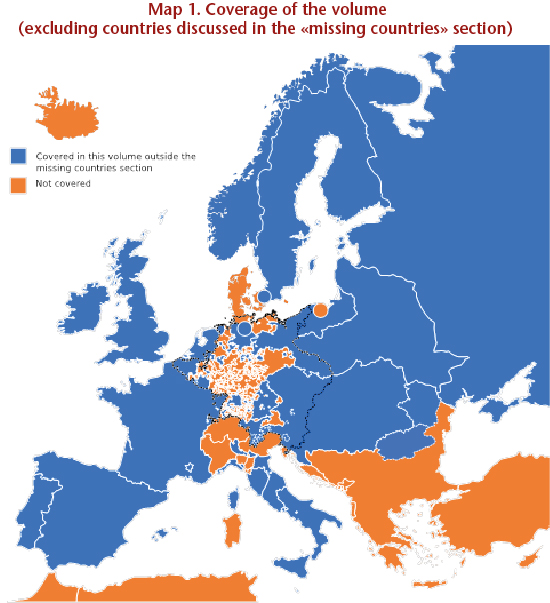 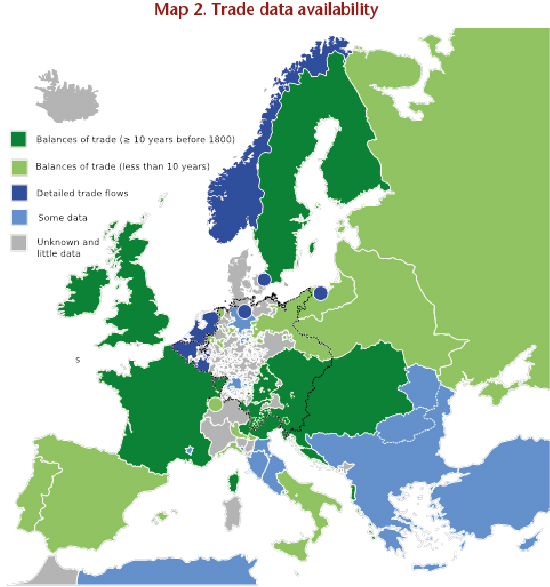