At its meeting on October 9th, the Euro Area Business Cycle Dating Committee of the Centre for Economic Policy Research (CEPR) in London drew on the OFCE for this thorny issue (for the composition of this committee, which I chair, see here). The Committee’s mission is to establish a chronology of recessions and expansions in the euro area, similar to what the National Bureau of Economic Research has done for the United States, dating back to 1854.

This chronology is valuable in two ways.

The first is that it allows economists to examine the characteristics of Europe’s economic development. Do recessions tend to be short or long-lasting? Frequent or rare? Deep or mild? Is the euro area evolving in concert with the US economy? Is the slowdown in economic activity caused by the financial crisis unusual (more persistent than usual, sharper)? Without a clear definition of the timing of the ups and downs in Europe’s economic activity and without a sketch of cyclical fluctuations, we cannot provide answers to these relatively basic questions.

The second advantage of this chronology is that establishing it requires an examination of all aspects of economic activity: GDP, of course, but also consumption, investment and especially employment (number of employed persons, number of hours worked). According to the CEPR’s dating exercise, an expansion is a period in which every aspect of economic activity is growing significantly. It is not necessarily an episode of at least two consecutive quarters of GDP growth (much less one quarter!). For example, the CEPR Dating Committee has determined that the countries composing the future euro area were in recession during the period from the 3rd quarter of 1980 to the 3rd quarter of 1982, whereas real GDP had risen for several quarters during this time and it was higher at the end of the recession than at the beginning! The culprits were investment and employment, which fell sharply during this period.

To add to the complexity of the dating effort, the harsh reality of the world of economic statistics should not be forgotten: the statistics reach us late and are subsequently revised, sometimes significantly, over time. Unlike meteorologists who know the temperature at the top of the Eiffel Tower in real time, economists have no idea, for example, of the level of GDP for the current month or quarter. The first estimates are released only several months later (e.g. the first flash estimate of euro area GDP for the third quarter of 2013 will be published by Eurostat only on 14 November 2013), and it might turn out that growth rates that seem positive based on preliminary estimates wind up after subsequent revisions to be negative – or vice versa. By examining all the determinants of economic activity (including employment), and not just GDP, the Committee is guarding against (so far successfully) the imperfections in this data so as to avoid, for instance, declaring the existence of a recession which turns out to be a statistical mirage that disappears after further review of the data. Thus, the Committee did not report in September 2003 the existence of a recession between 2001 and 2003 even though the data showed a decrease in GDP during that time (but never, it is true, for two consecutive quarters). It concluded that there had been a prolonged pause during a period of expansion. This was a good move, as subsequent revisions of GDP cancelled these quarters of declining economic activity (see Figure 1). Its diagnosis was thus well advised. 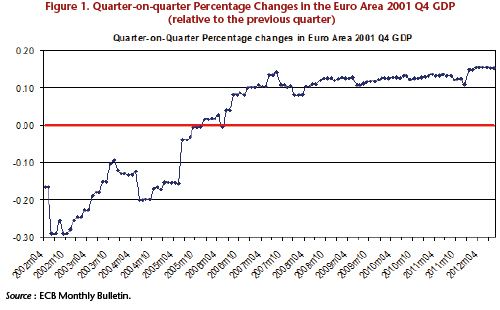 So let’s get back to the euro area in the state we see it in October 2013. The area hit a peak in economic activity in the 3rd quarter of 2011 and, since going into recession at that time, it experienced quarterly growth that was slightly positive in the second quarter of 2013. The first estimate for the third quarter of 2013 will not be known, as mentioned earlier, until 14 November. There are, it is true, several corresponding indexes indicating that the cycle is in an upwards phase and that the macroeconomic outlook for 2014 is more favourable. But on 9 October the Dating Committee noted, nevertheless, that it would be premature at that time to conclude that the euro area was out of recession. Indeed, neither the length nor the strength of the putative recovery in economic activity was sufficient to conclude that the recession was already over. This judgment was not based on the absence at that point of two consecutive quarters of GDP growth because this is not the criterion that (mechanically) guides the Committee’s thinking. Nor does it reflect any pessimism about the economic outlook for 2014, because the Committee is not in the business of making predictions. The Committee’s assessment is based simply on a review of all the data available at the time it meets. The Committee has not excluded that the euro area is simply going through a pause in the recession it entered a year ago. 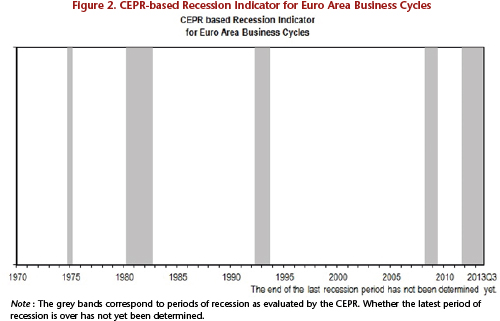