Japan’s reconstruction: constrained by the deterioration in public finances

Following the earthquake that hit Japan in March 2011, the government estimated the cost of the loss at 16.9 trillion yen (3.6 points of GDP). The response in terms of the structural deficit needed to deal with this exogenous shock conflicts with the government’s desire to implement an austerity policy to reduce the deficit. The additional financing requirements are thus coming at the worst possible time, amidst the economic crisis that began in 2008, which has been accompanied by a sharp deterioration in public finances due to the need to prop up the economy.

On the growth front, 2011 was a difficult year for Japan, coming on the heels of a 4.4% rebound in GDP in 2010 following a 5.5% drop in 2009. While the economy saw renewed growth in Q3 of 2011 (1.9% GDP growth quarter-on-quarter), after two quarters of falling GDP, at year end floods in Thailand again disrupted the supply chains of Japanese firms, and the economy faltered (zero growth in Q4 and -0.7% growth for 2011). The period of reconstruction begins in 2012.

Contrary to expectations, the series of plans passed in 2011 have not resulted in a rapid surge in public spending: public consumption grew by 2.1% in 2011, unchanged from 2010 and less than in 2009, and public investment fell by 3.1% in 2011. Reconstruction costs were partly substituted for other expenses. Also, part of the budget adopted was set aside and so is just beginning to be spent. Public orders for construction work rose by 20% in Q4 of 2011 yoy, and public works in progress rose sharply at year end. Thus, the additional expenses related to the reconstruction costs already approved will be spread in part over the coming quarters, and even beyond fiscal year 2012.

Japan’s fiscal situation is actually precarious. The expenditures needed to rebuild the devastated areas were decided in a context of high levels of deficit and debt related to the crisis. The budget deficit has indeed deteriorated sharply since the beginning of the crisis, rising from 2.2% of GDP in 2008 to 8.1% in 2010, while the debt has risen by 31.2 GDP points since 2007, to reach 199% of GDP in 2010. In 2011, the deficit widened to 9.3% of GDP mainly due to the increased debt burden, higher social security spending and the fall in GDP in 2011. The government announced that some plans would be financed by a combination of restrictions in other areas of expenditure, surplus tax revenues related to the improvement in activity in 2010, and the accumulated reserves from past budgets (for a quarter of the budget dedicated to reconstruction in 2011-2012). 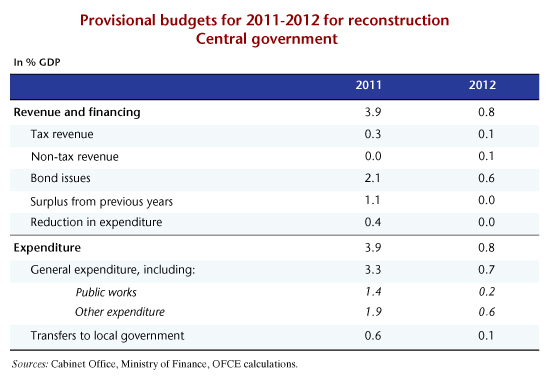 However, beyond 2013, there is still uncertainty about the direction of government economic policy. In the Japanese government’s medium-term fiscal strategy, decided in 2010, it aimed to halve the primary deficit of central and local government by 2015 compared to the level in 2010 (6.4% of GDP), and to break even by 2020. According to our calculations, balancing the primary structural deficit would require the implementation of a major fiscal consolidation effort. This would involve a negative fiscal impulse on the order of 1.1 GDP points a year in 2014, which is nevertheless a slower pace than the consolidation policies planned in the euro zone in 2012-2013 (see “He who sows austerity reaps recession” in our forecasting dossier). To this end, an increase of 5 points in the consumption tax is to be considered during the current session of the Diet, Japan’s parliament, which will wind up in June. This increase would occur in two stages and yield 2.5 GDP points in tax revenue. According to the latest medium-term forecast of the Japanese government, this will not be sufficient to meet its targets (Figure 1). Moreover, the means to achieve a balance by 2020 have not been clarified, and the government has not indicated how the debt built up to finance reconstruction would be repaid. Finally, given the continuing growth of the public debt, the interest burden, which currently is low (1.8 GDP points in 2011), will place an increasing burden on state finances in the future. This will exacerbate the government’s difficulties in implementing any budgetary changes aimed at stabilizing the debt-to-GDP ratio by 2020, and then to bring it down even further.

Despite all this, Japan does not seem to need a brutal fiscal consolidation, as it is currently borrowing at low interest rates (0.86% for the last issue of 10-year government bonds). Furthermore, the share of the debt held by non-residents is still low (6.7% in Q4 of 2011), and the abundant savings of the Japanese population, together with the Japanese Central Bank’s programme of share purchases, considerably reduces the risk of a sovereign debt crisis like the one seen in the euro zone. 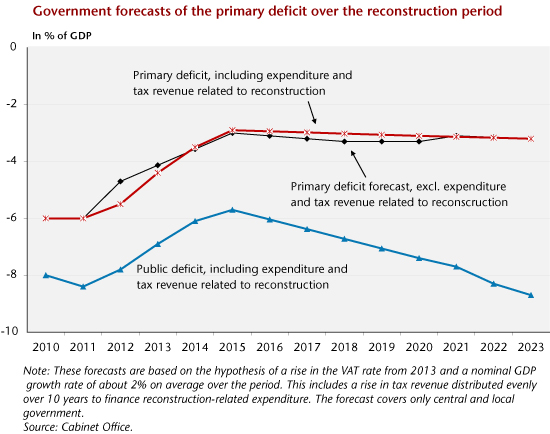 This text refers to the economic analysis and forecast for 2011-2012, which is available on the OFCE website.