A note on the immaterial singularity of business investment in France from 26 October 2018 highlighted the significant scale of investment in intangible assets by companies in France. In comparison with its partners, who are similar in terms of productive specialization, the French economy invests relatively more in Research and Development, software, databases and other types of intellectual property. Looking at gross fixed capital formation (GFCF) excluding construction, the share of intangible investment reached 53% in 2015, compared to 45% in the United Kingdom, 41% in the United States, 32% in Germany and 29% in Italy and Spain.

These results are corroborated by statistics that evaluate other dimensions (INTAN basis), outside the national accounts, of intangible investments, such as those in organization, training and marketing. France is not lagging behind its partners in this type of asset either (see Guillou, Lallement and Mini, 2018).

As for the national accounts, these include two main intangible assets: R&D expenditure and expenditure on software and databases. In terms of R&D, French investment performance is consistent with the technological level and structure of its production specialization. If the French economy had a larger manufacturing sector, its spending on R&D would be much larger. What is less coherent is the extent and intensity of investment in software and databases, to such an extent that one cannot help but wonder whether this immaterial dimension of investment is almost unreal.

Figure 1 illustrates that “Software and databases” investment is larger in France than in the rest of the European countries. The share is, however, close to the levels observed in the United Kingdom and the United States. Of course, this share reflects the weakness of other targets for investment such as machinery and equipment specific to the manufacturing sector (see the earlier note on investment). 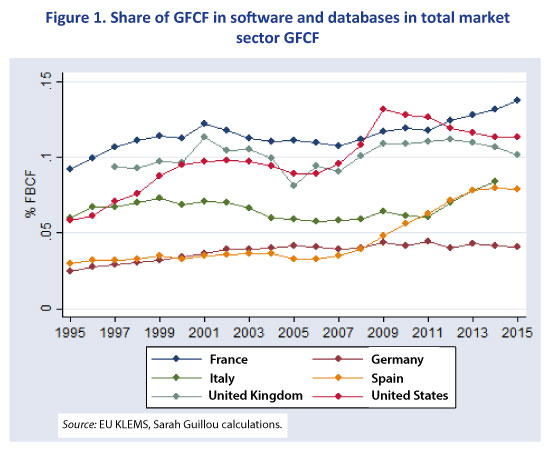 In terms of the rate of investment, that is to say, investment expenditure as a ratio of value added of the market economy, the dynamism of the French economy in terms of software and databases is confirmed: France clearly outdistances its partners. 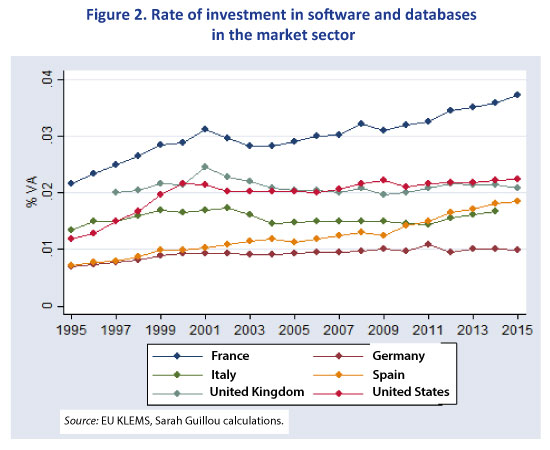 This also raises questions because it reveals a gap of 2 percentage points of the VA relative to the United States and 3 points relative to Germany. French companies invested 33 billion euros more in software and database than did German companies in 2015. Note that in 2015 total GFCF excluding construction was 285 billion euros in Germany and 197 billion in France. Moreover, the gap in the investment rate across all types of assets in France was 4 percentage points vis-à-vis Germany (see Guillou, 2018, page 20).

This gap can be explained only under the conditions, 1) that the production function of the French economy uses more software and databases than its partners, or 2) that the GFCF software and databases item is either artificially valued in relation to the current practices of France’s partners, which may be the case, or because the value of the software asset is more important in France (companies may choose to put spending on software in current spending), either because the asset value is greater (which is possible because part of this value, that of software produced in-house, is up to the discretion of the companies).

Understanding this gap is of considerable importance, because it is decisive for making a diagnosis of the state of French corporate investment and the state of its digitization (see Gaglio and Guillou, 2018). The aggregate macroeconomic value of GFCF includes GFCF in software; if this is overestimated, it has implications for the macroeconomic balance and the contribution of GFCF to growth. The measurement of total factor productivity would also be affected, as the overestimation of capital (fuelled by investment) would lead to underestimating residual technical progress. So not only would the investment effort of French companies be overestimated, but the diagnosis of the nature of growth would also be off.

But there are reasons to question how real this gap is. In other words, shouldn’t the immateriality of GFCF be viewed as a flaw in reality?

On the one hand, it is not clear that France’s productive specialization justifies such overinvestment in software and databases. For example, the comparison with Germany, the United Kingdom, Italy, the United States and Spain shows specialization that is relatively close, with the exception of the manufacturing sector, which has a much greater presence in Germany. The share of the “Information and Communication” sector in which digital services are located correlates well with GFCF in software, but this sector is not significantly more present in France. It represents 6.5% of the value added of the market economy, compared to 6% in Germany and 8% in the United Kingdom (see Guillou, 2018, page 30).

On the other hand, the data from the input-output tables on consumption by branch of goods and services coming from the digital publishing sector (58) – a sector that concentrates the production of software – do not corroborate French superiority. The following graphs show that, whether considering domestic consumption (Figure 3) or imported (Figure 4), intermediaries’ consumption of digital services in France does not confirm the French domination recorded for GFCF in software and databases. On the contrary, these two graphs show that the French economy’s consumption of inputs from the digital publishing sector is not especially high and even that domestic consumption has fallen.
While the overlap between “software and databases” on the one hand and “digital publishing services” on the other is not perfect, there should not be a contradiction between the trends or the hierarchies between countries – unless software expenditure consists mainly of software produced in-house, in which case it will be recorded as assets rather than as consumption of inputs from other sectors. 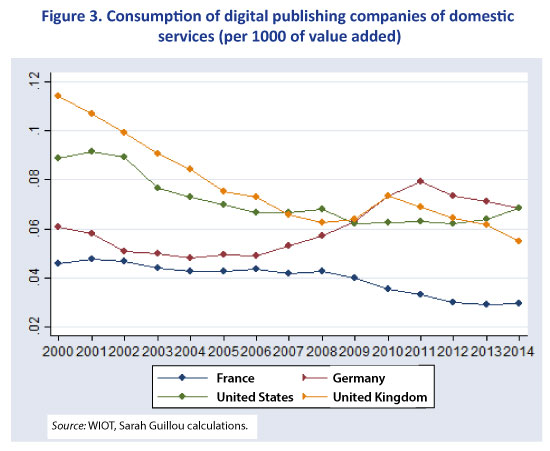 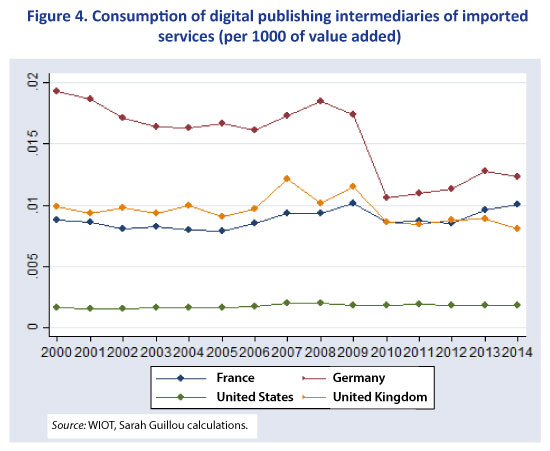 As a result, investment in software and databases would be mainly the result of in-house production, whose capital asset value (recorded as GFCF) is determined by the companies themselves. Should we conclude that GFCF is overvalued? This is a legitimate question. It calls for more specific investigation by investor and consumer sectors in order to assess the extent of overvaluation relative to economies comparable to France.