Revisions of the growth potential: the impact on deficits

At the end of the Great Recession of 2008/09, the fiscal problem that governments had to face was seemingly simple, as was the solution put forward. The operation of the automatic stabilizers and the stimulus packages put in place to counter the 2008/09 recession sharply increased the public deficits. This situation, which was dictated by urgency, was acceptable in the short term, but not in the longer term. Logically this would lead to an adjustment in the public accounts to reduce the deficits and halt the growth of the debt. Fiscal discipline at a forced pace under the baton of the European Commission was therefore the economic policy instrument adopted by almost all the euro zone countries.

The appropriateness of this strategy, which was undertaken to solve the initial problem, i.e. the excessive deficits in the euro zone, should nevertheless be discussed. It relied on a macroeconomic diagnosis made at the end of the recession in 2008/09 that conditioned the assessment on the spontaneous capacity for an economic recovery – in effect, the fraction of the public deficit that was likely to be spontaneously absorbed by renewed growth depended on this capacity for recovery.

Part of the deficits could be absorbed on their own

The public deficit excluding interest expense, i.e. the primary deficit, can be subdivided into two components: a cyclical component and a structural component. The cyclical component results from cyclical fluctuations in GDP around its potential, that is to say, the level of GDP achievable without inflationary pressures using the available production factors: during a phase when GDP is slowing relative to its growth potential, and thus when the output gap is widening, tax revenues slow, and public spending, in particular on social welfare, picks up. What follows is a spontaneous increase in the deficit. In economic theory this self-corrective mechanism is called the “automatic stabilizers”. The other component of the deficit is deduced from the previous one as a complement to the total deficit: this is the deliberate component, which results from the impact of economic policy. This discretionary component can be eliminated only by implementing a policy that is symmetrical to what gave rise to it, that is to say, by means of an austerity policy. By its nature it has a dampening effect on the recovery, whereas the expansionary policy during the previous phase results in boosting activity. Fiscal policy is thus an instrument for smoothing the economic cycle.

The spontaneous portion of the deficit that appeared after the 2008/09 recession was destined to be automatically reduced once growth returned. Only the elimination of the discretionary component justified a restrictive policy. The extent of the effort needed to achieve this therefore depended on the measurement of the output gap, which conditioned the estimate of the cyclical deficit, and by inference the estimate of the deliberate deficit.

The cycle’s effect on the evaluation of the potential

The measurement of the output potential that is used to calculate the output gap is obviously central for calibrating as accurately as possible the budget cuts needed to eliminate the portion of the deficit that cannot be absorbed spontaneously by growth. But policymakers face a major difficulty here, i.e. the unobservable nature of the potential, which consequently must be estimated – and economists are far from unanimous about these estimates. Moreover, periodic revisions can be significant even within the same institution, which modifies the diagnosis made and – if this institution happens to be responsible for defining the rules constraining fiscal policy, as in the case of the European Commission (EC) –  the measures to be taken as well.

A review of the revisions of the growth potential calculated by the EC shows the uncertainty of this estimate (see last section below). The estimate also appears to depend on current growth, which is somewhat paradoxical for an estimate of a supply function that depends on long-term economic parameters such as increases in the labour force, productivity and the capital stock. It is understandable that the trajectory of these supply parameters is deflected slightly during cyclical hiccups, particularly through investment, which is a vehicle for technical progress and ensures the growth of capital or a loss in human capital due to long-term unemployment. But the fact that the inclusion in the estimates of a cyclical phenomenon, even one as massive as the recession of 2008/09, is leading to revisions of the growth potential on the order of that seen between Spring 2008 and Spring 2009 raises questions. This is particularly so as these revisions have also affected the years prior to the recession, which were not affected by changes in the conditions of accumulation. Thereafter, the resumption of growth in 2010 led to revisions of the growth potential in the other direction, including for the years prior to the recession. Finally, the economic downturn in 2011 led to a further series of revisions, once again downwards.

The reduction in growth potential led to significant revisions downwards of the estimated output gap (see chart). These are not neutral for calibrating the fiscal consolidation policy. This is because for a given deficit, the estimate of the output gap of -2% for 2010, for example, versus nearly -6% under the assumption of a continuation of the trajectory of potential GDP estimated before the recession, would increase the part of the perceived structural deficit and thus call for heightened austerity. That’s what happened in 2010, when the stimulus packages gave way to plans for drastic budget cuts. Generalized to all member countries, they nipped the nascent recovery in the bud and plunged the euro zone countries into a new recession. 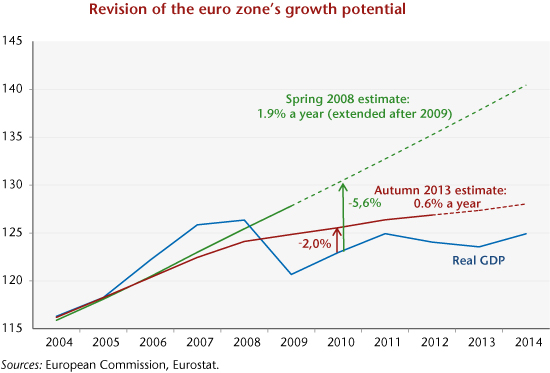 The excessive sensitivity of the estimate of potential growth to current growth precipitated the commitment to austerity policies in the euro zone and subsequently pushed towards tightening fiscal restraint further. By depressing economic activity, austerity fuelled factors that undercut supply through the destruction of capital, a slowdown in investment and deskilling the labour supply. The economies’ capacity for a spontaneous recovery was thus undermined, which could only lead to an increase in the share of the structural deficit in the total deficit, and ultimately to the need for greater austerity.

The budget purge thus led to a second recession, which invalidated the deficit reduction targets set at the beginning, as the automatic stabilizers have again increased the cyclical component of the deficit. Rigour, poorly calibrated, was counter-productive and thus could not achieve the initial goal of rapid deficit reduction. The results are far from being commensurate with the sacrifices made by the European economies.

The 2008/09 recession led the European Commission to revise its estimate of the growth potential for the member countries rather significantly. For the euro zone as a whole, the revision process began between Spring 2008 and Spring 2009, when the effects of the financial crisis were expressed in real activity: the start of the recession in the euro zone in the fourth quarter of 2008 was associated with sharp downward revisions of the growth potential for 2008 and 2009, by -0.7 and -1.2 points, respectively (Table). There were also relatively substantial revisions to earlier years, from -0.3 to -0.5 points for the years 2004 to 2007. However, no major revision occurs between the estimates of Spring 2009 and Spring 2010, despite the downturn in year-on-year GDP growth, indicating that the modification of the economic landscape had already been included in the estimates.

The growth potential has been revised not only downwards, but also upwards when growth picked up after the recession. Between Spring 2010 and Spring 2011, the revisions were spread from +0.1 to +0.3 points and also affected more distant years. Finally, a new series of downward revisions took place with the second economic downturn in 2011. The years prior to 2008 changed little, but they fall within a broader range for the years 2008 to 2013, from -0.2 to -0.8 points, which for 2012 amounts to dividing the potential growth rate by two and a half. 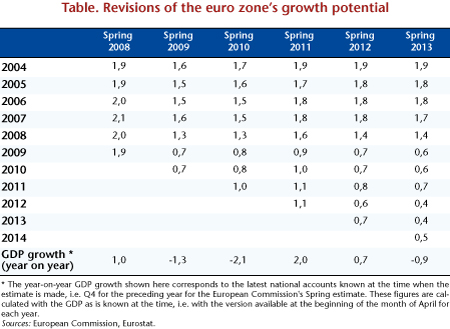 The effect of current growth on the estimation of growth potential by the European Commission is thus obvious. This results in a high variability of the growth potential and therefore significant revisions of the output gap, which affects economic policy decisions since the structural balance depends on this evaluation.