In an article published in 2013 in Open Economies Review [1], C. A. E. Goodhart and D. J. Lee compare the mechanisms for recovering from the crisis in the United States and Europe. Based on a comparison of the situation of three states (Arizona, Spain and Latvia) faced with a property crash and recession, the authors explore the reasons for the growing divergence observed among the euro zone countries, a divergence that is not found in the United States. Their analysis is based on the criteria for optimum currency areas, which enable the members of a monetary union to adjust to adverse shocks and to avoid a lasting difference in their unemployment rates during an economic slowdown or downturn. While Latvia is not formally part of a monetary union [2], its currency nevertheless has remained firmly anchored to the euro during the crisis. Thus none of the countries studied by Goodhart and Lee resorted to a nominal devaluation to absorb the financial and real shocks that they faced. The authors conclude that while Arizona dealt with the shocks better than Spain, this was due both to the greater fiscal solidarity that exists between the states of the United States and to the greater integration of the US banking system, which helps to absorb shocks specific to each state.

In addition to de jure or de facto membership in a monetary union, Arizona, Spain and Latvia also all went through a real estate boom in the 2000s, followed by a correction that began in 2006 in Arizona and Latvia, and a year later in Spain (Figure 1). The real estate crisis was accompanied by a recession, with the same time lag persisting between Spain and the other two states. Latvia recorded the sharpest downturn in activity (-21% between 2007 and 2010). However, the downturns experienced by Arizona (-5.5% since 2007) and Spain (5% since 2008) were comparable. While the downward adjustment of the property market stopped in Arizona (recovery is underway in the US state), the recession is continuing in Spain. Overall, this difference in adjustment is reflected in a continuing increase in unemployment in Spain, whereas it has fallen by 2.8 percentage points in Arizona from the peak in the first quarter of 2010 (Figure 2).

Spain’s inability to pull out of the recession along with the increasing divergence of the economies in the euro zone raises the question of the capacity of the euro zone countries to adjust to a negative shock. The theory of optimum currency areas, originally developed by Mundell in 1961 [3], can help to evaluate the conditions in which a country may have an interest in joining a monetary union. The optimality of this choice depends on the country’s ability to absorb shocks without resorting to currency devaluation. Different adjustment mechanisms are involved. These consist mainly of the following: [4] the flexibility of prices and in particular of wages; labour mobility; the existence of fiscal transfers between the countries in the monetary union; and financial integration. Price flexibility corresponds to an internal devaluation mechanism. As for depreciation, the point is to become more competitive – by lowering relative labour costs – to stimulate exports and growth during a negative shock. However, this type of adjustment generally takes much longer and is more costly, as is suggested by the recent examples of Iceland and Ireland.[5] Labour mobility makes for an adjustment whenever the recession leads people to migrate from a state with high unemployment to one where it is lower. The implementation of fiscal transfers occurs when various mechanisms in states where growth is slowing make it possible to benefit from stabilizing transfers from other states in the union or from a higher level of government. Finally, Goodhart and Lee also consider the stabilizing role of the local banking system. In this case, in the euro zone, the less the local banking system has been weakened by the real estate crisis or the public debt crisis, the greater is its capacity to absorb the shock.

The authors analyzed the adjustment of the economies in question in the light of these four criteria. They studied in particular the degree of price flexibility and labour mobility as a function of unemployment in the three states. Then they evaluated the importance of fiscal transfers and the architecture of the banking landscape. Their findings were as follows:

The crisis in the euro zone thus has an institutional dimension. From the moment the countries freely consented to surrender their monetary sovereignty, they in effect also abandoned the use of a currency devaluation to cushion recessions. However, it is essential that alternative adjustment mechanisms are operative in order to ensure the “sustainability” of monetary unification. In this respect, the article written by Goodhart and Lee is a reminder that such mechanisms are still lacking in the euro zone. Negotiations over the EU budget have not offered any prospect for the implementation of fiscal transfers to stabilize shocks at the European level. The discussion on Eurobonds has stalled. Although the European Stability Mechanism (ESM) acts as a tool for solidarity between Member States, it meets a different need, because it involves only emergency financial assistance and is not a mechanism for automatic stabilization. Banking integration could also help dampen fluctuations. However, the crisis has led to greater fragmentation of European banking markets. The latest report on financial integration in Europe, published by the ECB, shows a 30% decrease in cross-border bank flows in the recent period. Similarly, despite the common monetary policy, the interest rates charged by European banks have recently diverged [6] (Figure 3). Thus, despite the European banking passport created by the European Directive of 15 December 1989 on the mutual recognition of authorizations of credit institutions, cross-border banking in Europe is still relatively undeveloped. The retail banking model is based on the existence of long-term relationships between the bank and its clients, which undoubtedly explains why the integration process is taking much longer than for the stocks, bonds and currency markets. It is nevertheless still the case that a banking union could be a further step in this difficult process of integration. This would promote the development of transnational activity, which would also help to de-link the problem of bank solvency and liquidity from the problem of financing the public debt. 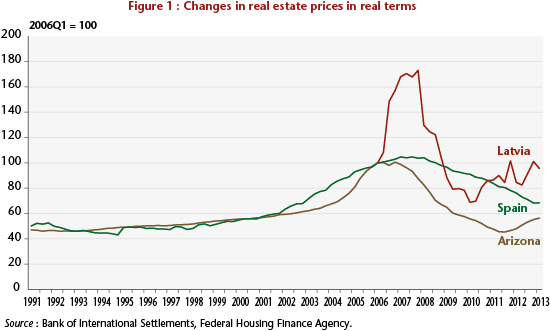 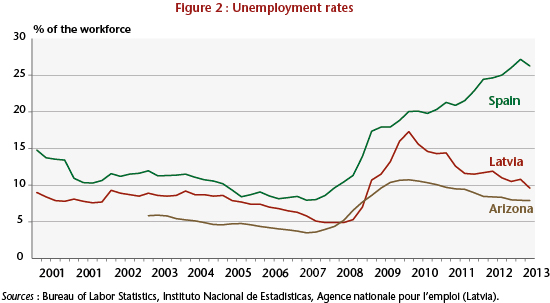 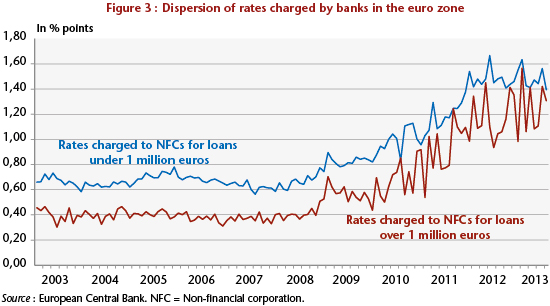 [1] “Adjustment mechanisms in a currency area”, Open Economies Review, January 2013. A preliminary version of this article can be downloaded at: http://www.lse.ac.uk/fmg/workingPapers/specialPapers/PDF/SP212.pdf

[2] Latvia has been part of the European currency mechanism since 2005 and is to adopt the euro on 1 January 2014.

[4] One could also add the level of an economy’s openness or the degree of diversification of production. Mongelli (2002) offers a detailed review of these various criteria. See: “New views on the optimum currency area theory: what is EMU telling us?”, ECB Working Paper, no. 138.

[5] See Blot and Antonin (2013) for a comparative analysis of the cases of Ireland and Iceland.

[6] C. Blot and F. Labondance (2013) offer an analysis of the transmission of currency policy to the rates charged by the banks to non-financial companies (see here) and to real estate loans (see here).