In the spring of 2019, the OFCE forecast real GDP growth of 1.5% for 2019 and 1.4% for 2020 (i.e. cumulative growth of 2.9%). At the same time, the average forecast for the two years compiled by Consensus Forecasts[1] was 1.3% each year (i.e. 2.6% cumulative), with a standard deviation around the average of 0.2 points. This difference has led some observers to describe the OFCE forecasts as “optimistic as usual”, with the forecasts of the Consensus or institutes with less favourable projections being considered more “realistic” in the current economic cycle.

A growth forecast is the result of a research exercise and is based on an assessment of general trends in the economy together with the impact of economic policies (including budget, fiscal and monetary policies) and exogenous shocks (such as changes in oil prices, social disturbances, poor weather, geopolitical tensions, etc.). These evaluations are themselves based on econometric estimations of the behaviour of economic agents that are used to quantify their response to these shocks. It is therefore difficult to comment on or compare the growth figures issued by different institutes without clearly presenting their analytical underpinnings or going into the main assumptions about the trends and mechanisms at work in the economy.

However, even if the rigour of the approach underlying the OFCE’s forecasts cannot be called into question, it is legitimate to ask whether the OFCE has indeed produced chronic overestimations in its evaluations. If such were the case, the forecasts published in spring 2019 would be tainted by an optimistic bias that needs to be tempered, and the OFCE should readjust its tools to a new context in order to regain precision in its forecasts.

Figure 1 shows the cumulative forecasts of French GDP by the OFCE for the current year and the following year and then compares these with the cumulative results of the national accounts for the two years. In light of these results, it can be seen that the OFCE’s forecasts do not suffer from a systematic bias of optimism. For the forecasts conducted in 2016 and 2017, the growth measured by the national accounts is higher than that anticipated by the OFCE, which, while revealing an error in forecasting, does not constitute an overly optimistic view of the recovery.

The opposite can be seen in the forecasts in 2015 for 2015 and 2016; the favourable impact of the oil counter-shock and of the euro’s depreciation against the dollar during the second half of 2014 was indeed slower to materialize than the OFCE expected. The year 2016 was also marked by one-off factors such as spring floods, strikes in refineries, the tense environment created by the wave of terrorist attacks and the announcement that certain tax depreciation allowances for industrial investments would end.

In general, there is no systematic overestimation of growth by the OFCE, although some periods are worth noting, such as the years 2007 and 2008 when the negative repercussions of the financial crisis on real activity were not anticipated by our models during four consecutive forecasts. Ultimately, of the 38 forecasts conducted since March 1999, 16 show an overestimate, or 40% of the total, with the others resulting in an underestimation of growth. 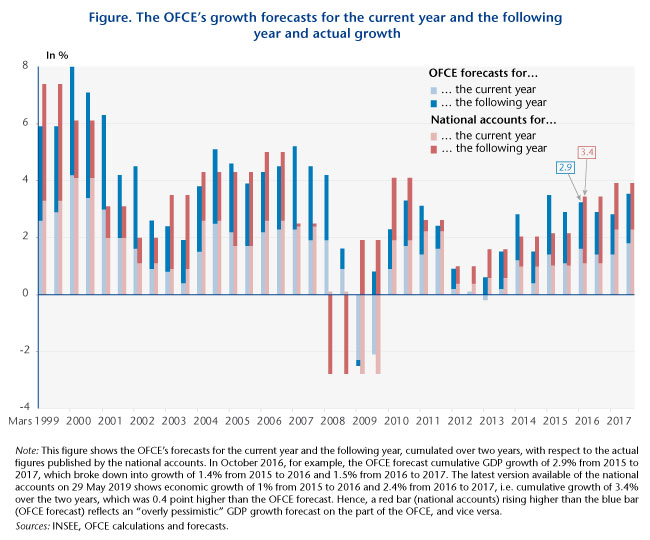 Forecasts relatively in line with the final accounts

Furthermore, the accuracy of the forecasts should not be evaluated solely in relation to the provisional national accounts, as INSEE’s initial estimates are based on a partial knowledge of the real economic situation. They are revised as and when the annual accounts and tax and social information updates are constructed, which leads to a final, and therefore definitive, version of the accounts two-and-a-half years after the end of the year[2].

Statistical analysis conducted over a long period thus shows that, while there is room for improvement, the OFCE’s forecasts are not affected by an overestimation bias when assessing their accuracy with respect to the final accounts. 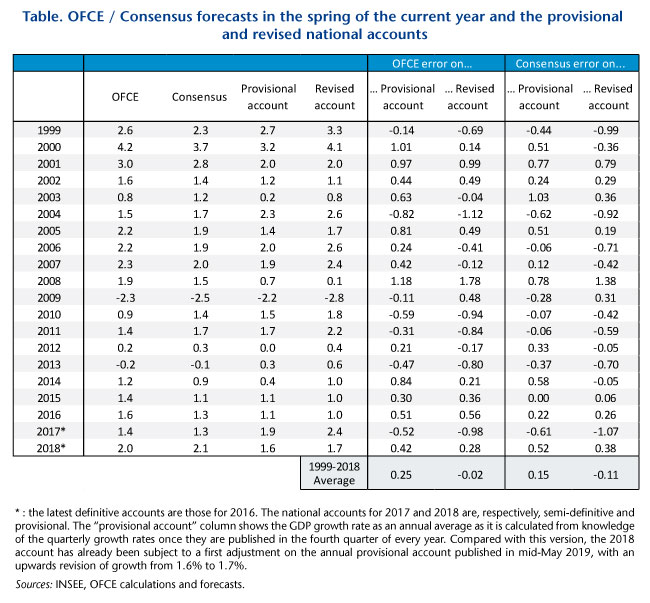 [1] The Consensus Forecast is a publication of Consensus Economics that compiles the forecasts of the world’s leading forecasters on a large number of economic variables in about 100 countries. About 20 institutes participate for France.

[2] At the end of January 2019, the INSEE published the accounts for the 4th quarter of 2018, which provided a first assessment of growth for 2018 as a whole. At the end of May 2019, the accounts for the year 2018, calculated based on the provisional annual accounts published mid-May 2019, were revised a first time. A new revision of the 2018 accounts will take place in May 2020, and then a final one in 2021 with the publication of the definitive accounts. For more details on the National Accounts revision process, see Péléraux H., « Comptes nationaux : du provisoire qui ne dure pas », [The national accounts : provisional accounts that don’t last], Blog de l’OFCE, 28 June 2018.