An exploratory study on the magnitude, geographical distribution and effects of green employment in the United States by Francesco Vona, Giovanni Marin, Davide Consoli

Addressing grand environmental challenges (e.g. climate change) entails adapting the skill base and, thus, the composition of the workforce. Recent interventions both in the form of environmental regulation or of subsidies – i.e. the American Recovery and Reinvestment Act (ARRA) of 2009 and its green component which accounts approximately for 15% of the overall fiscal stimulus – revived the debate on whether environmental policies create or destroy employment. However, existing empirical evidence on green employment is limited in terms of timespan and scope due to data constraints. In a recent study (Vona et al., 2018), we tackle this gap by elaborating a novel approach to measure green employment in US local labour markets. Using the task approach to approximate the time a worker spends in green activities (Acemoglu and Autor, 2011), allows us to provide a nuanced picture of how green employment has evolved in the turbulent period between 2006 and 2014 as well as a suggestive estimation of the effect of “becoming greener” for local labour markets.

Descriptive analysis reveals that green employment is pro-cyclical, highly skilled, commands a 4% wage premium and is geographically concentrated. Green employment dynamics positively correlates with local green subsidies within the American Recovery and Reinvestment Act, local green knowledge, and resilience to the great recession. Finally, we find that one additional green job is associated with 4.2 (2.2 in the crisis period) new local jobs in non-tradable non-green activities.

The empirical identification of green employment is challenging for two reasons. First, it is not easy to define what a green job is, considering the ample spectrum of actions devoted to environmental sustainability from e.g. reducing pollution and resource exploitation to preventing pollution by reducing the use of energy and materials. Second, and partly as a reflection of the former, uncoordinated data collection on the part of national statistical offices have given way to different, often incoherent, empirical accounts. Existing data collection methods (for example, the US the Bureau of Labor Statistics’ Green Goods and Services Survey) approximate the share of green employment with the share of green goods over total production of surveyed companies, thus inferring green jobs indirectly at best from industry or product characteristics. These approaches do not shed light on the effective engagement of workers with activities aimed at developing and using green technologies and environmentally-efficient production methods on the workplace.

Using data from the Green Economy program of O*NET we quantify workers’ dedication to green activities by computing each occupation’s ‘greenness’, that is, the ratio between the importance of green occupational tasks and the total (importance-weighted) number of occupational tasks. While other approaches to measuring green jobs are based on a dichotomy – i.e. a job is either green or not – the greenness is a continuous measure that proxies the work time devoted to green activities (e.g. conservation of energy and materials, production, design and use of clean technologies) relative to non-green activities by the typical employee in an occupation. Thereby, the occupational ranking by greenness encompasses (i) jobs that carry out primarily green tasks (e.g., Environmental Engineers, Solar Photovoltaic Installers or Biomass Plant Technicians) (ii) occupations wherein environmental work tasks are part of a broader set of activities (e.g., Electrical Engineers, Metal Sheet Workers or Roofers) and, importantly, (iii) jobs that engage environmental tasks only occasionally (e.g., traditional Engineering occupations, Marketing Managers and Construction Workers). In short, our approach moves away from the traditional dichotomy ‘green economy vs the rest’ and emphasizes the idea that all occupations potentially engage with green activities to a varying degree. This implies that the greening of our economies is no longer restricted to renowned flagship activities (i.e. wind energy generation) but is rather a widespread transformation.

The task-based definition of green employment is operationalised with the aim of identifying a series of key stylised facts. To this end, we pair data on job task requirements from the Occupational Information Network (O*NET) with Occupational Employment Statistics (OES) of the Bureau of Labor Statistics (BLS) on 826 occupations (six digit of the Standard Occupational Classification, SOC) across 537 metropolitan and nonmetropolitan areas over the period 2006–2014. 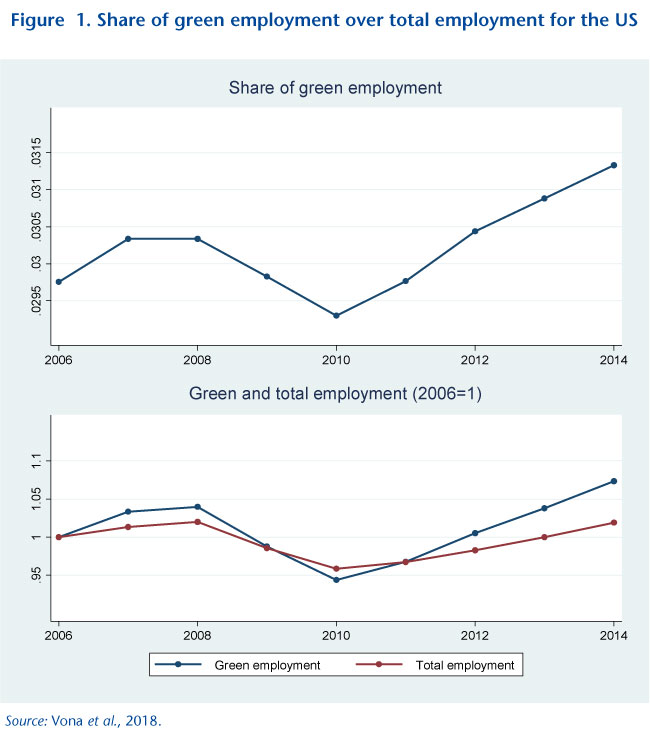 Table 1 reports for major occupational groups the initial share of green employment, the growth of green employment as well as the average years of education required by green and non-green jobs. Therein, we observe that 60.6% of total green employment is in high-skilled occupations, and that this has grown substantially from 58.2% in 2006 to 64.3% in 2014. The GE share among high-skilled, abstract occupations (Managers, Professionals and Technicians) is higher relative to low-skilled, manual occupations, with the exception of Installation and Maintenance Jobs. Indeed, low-skilled green jobs, especially those more directly exposed to the crisis, such as construction, experienced a sharp contraction. 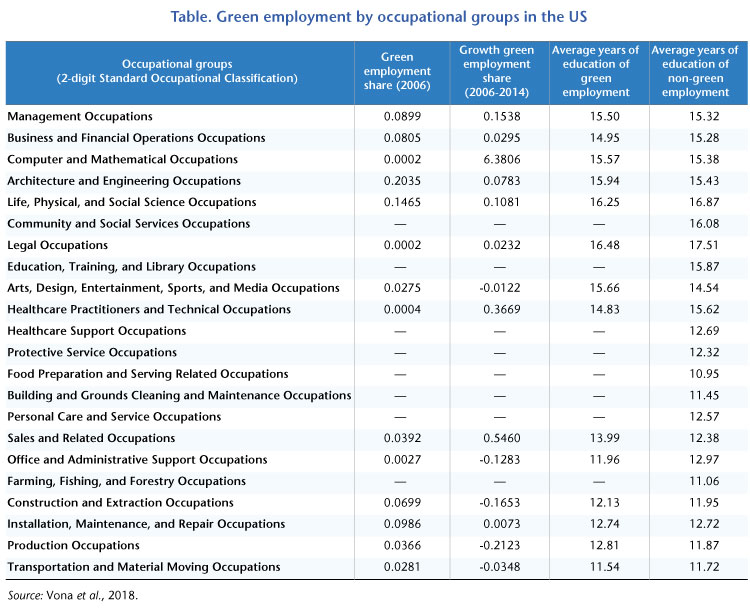 Fact #4: There is a convergence of areas with a lower share of green jobs, although green employment remains more concentrated especially in high-tech areas.

The plot in Figure 2 show that geographical concentration of green occupations, i.e. the extent to which green jobs cluster in particular areas, first declines and the stabilized at a level significantly higher than that of occupations with similar characteristics. A synthetic profiling highlights the following common characteristics of areas with the greater increase of GE: higher per capita income, higher probability of hosting high-tech clusters and public R&D labs, a stronger propensity to innovate (stock of green patents per capita) and higher-than-average share of employment in high-tech manufacturing and knowledge-intensive services. 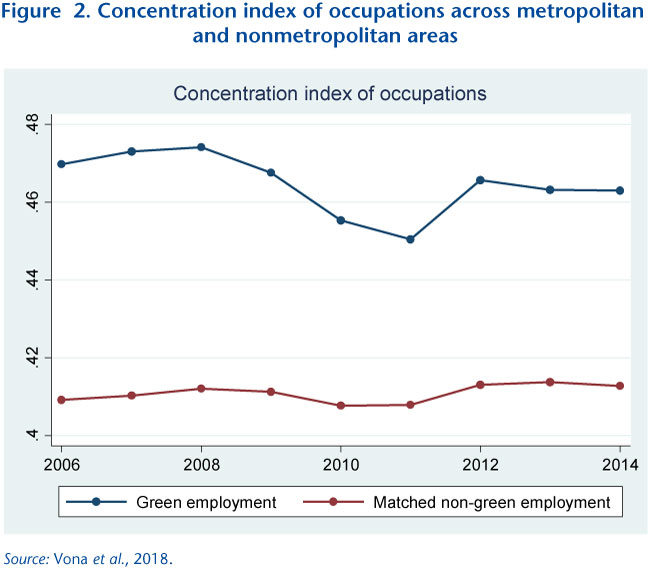 We then analyse the drivers of green employment in local labour markets. Important to this goal is the coincidence of the onset of crisis on the one hand and the adoption of policies to promote the green economy on the other hand, in particular the green component of ARRA. To compare the influence of the latter with structural forces, such as local resilience to the great recession and local exposure to trade and technology shocks, we regress the 8-years change of green employment share on environmental policies, initial levels of these drivers as well as a host of auxiliary controls, such as the amount of non-green ARRA subsidies.

Although our results cannot be interpreted as causal effects, we find a strong association between the local green ARRA subsidies and the 8-years change of green employment. Moreover, we further corroborate our stylized facts by showing that the growth of green employment is positively associated with the local endowment of green knowledge and the resilience in the face of the great recession. Finally, our estimates suggest that only green ARRA has a positive correlation with the growth of both green and non-green employment.

Does the greening of the economy carry positive effects beyond environmental goals? We use the ARRA stimulus of 2009 (0.3 % of US GDP) as policy shock to assess whether the emergence of new green activities is beneficial to local employment.

We estimate the local green job multiplier, namely the effect of creating one additional green job on local employment in the non-tradable sector (Moretti, 2010; Faggio and Overman, 2014), and find that one additional green job generates 4.2 new jobs in the non-tradable non-green sector. This is robust to various definitions of non-tradable non-green sector. To illustrate, our result is close to that observed in high-tech manufacturing jobs (upper bound) and well above the multiplied found in mining jobs. Moreover, the green multiplier hangs on around a remarkable 2.2 during the recessionary phase, 2006–2010. Because local green ARRA spending is strongly correlated with both green and total job creation, this finding lends support to arguments in favour of using green subsidies as place-based policy.

Our estimation of the green job multipliers does not isolate the effect associated with green ARRA from that of other drivers. A more precise assessment of the differential impact of the green economy on growth and of the green stimulus package calls for further analysis at different levels of geographical aggregation based on data on green production and export. Another open issue is the extent to which these findings on the US compare to other countries. Moreover, the job-creation potential of green employment needs to be contrasted with the welfare improvement due to better environmental conditions enabled by green employment in order to better quantify the overall social costs and benefits of green employment. However, a full-fledged cost benefit analysis, based on a soundly theoretical framework, is required to answer these questions. These and other promising avenues are left for future research.