Would returning to the drachma be an overwhelming tragedy?

Following the vote in the Greek parliamentary elections on 17 June 2012, the spectre of the country leaving the euro zone has been brushed aside, at least for a while. However, the idea is not completely buried, and it is still being evoked in Greece and by various political forces around the euro zone. This continues to pose the question of the cost of a total default by Greece for its creditors, foremost among them France. The analysis published in the latest OFCE Note (No. 20, 19 June 2012) shows that, despite the magnitude of the potential losses, several factors could mitigate the consequences for the euro zone countries of a default by the Greek state.

The withdrawal of Greece from the euro zone, which is not covered in the Treaties, would cause a major legal headache, as it would involve managing the country’s removal from the Eurosystem [1]. In case of a return to a new drachma, which would depreciate sharply against the euro [2], the burden of the public debt still outstanding would be greatly increased, as would private debt, which would still be denominated in euros. Many financial and nonfinancial firms would go to the wall. Legally, Greece could not unilaterally convert its debt into new drachmas. Since the country’s public debt is not very sustainable and it is denominated almost exclusively in euros, Greece would certainly default (at least partially) on its public debt, including its foreign debt [3]. Given that the main holders of Greek debt are euro zone countries, what would be the magnitude of the shock in the case of a Greek default?

While more detail about this can be found in the OFCE Note (No. 20, 19 June 2012), the focus here is on providing a breakdown of the exposure of the euro zone countries (in particular France) to Greek public and private debt. Exposure to Greek public debt involves three main channels:

2) Participation in the Eurosystem;

3) The exposure of the commercial banks. 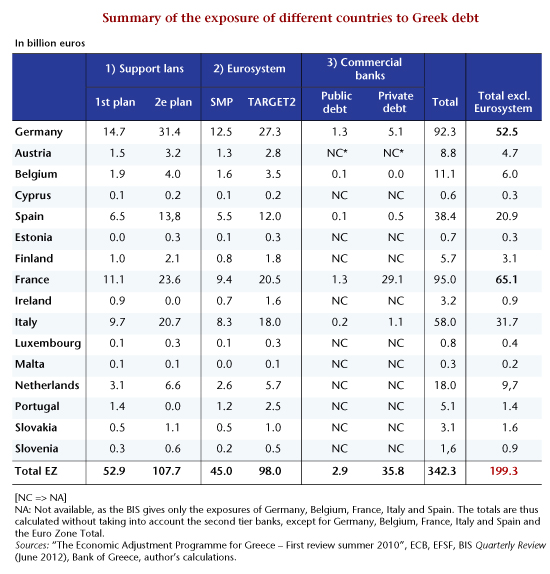 These amounts constitute an upper bound: they represent the maximum potential losses in the worst case scenario, namely the complete default of Greece on its public and private debt. Furthermore, it is impossible to predict with certainty all the chain reactions associated with a Greek exit from the euro zone: everything depends on whether the exit is coordinated or not, whether a debt rescheduling plan is implemented, the magnitude of the depreciation of the drachma against the euro, and so on.

The ”reassuring” element in this analysis is the magnitude of the potential losses (Table): the shock of a Greek exit would be absorbable, even if it would generate a shock on each member country and widen its deficit, undermining the members’ efforts to restore balanced budgets. However, this analysis also points out how intertwined the economies of the euro zone are, even if only through the monetary union, not to mention the mechanisms of the solidarity budget. A Greek exit from the euro zone could therefore open a Pandora’s Box – and if other countries were tempted to imitate the Greek example, it is the euro zone as a whole that could go under.

[1] The Eurosystem is the European institution that groups the European Central Bank and the central banks of the countries in the euro zone.

[3] The foreign debt designates all the debt that is owed by all a country’s public and private debtors to foreign lenders.

[4] This refers to a textbook case, where the drachma’s depreciation would be so great that the currency would no longer be worth anything.